Purify the Air in Your Home with this Scientific Solution 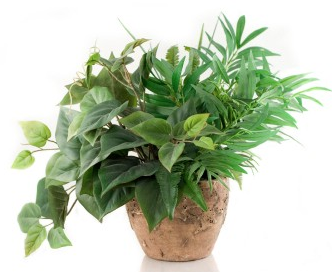 Pollution not only increases risk of respiratory illnesses, heart disease, learning disabilities, and even cancer, but can also accelerates aging. According to the Environmental Protection Agency (EPA), “studies of human exposure to air pollutants by EPA indicate that indoor levels of pollutants may be 2 to 5 times—and occasionally more than 100 times—higher than outdoor pollutant levels.”

They add that indoor air pollutants have been ranked among the top five environmental risks to public health.

We can reduce indoor pollution by vacuuming and dusting frequently, opening a window as much as we can, and investing in a quality air filter. But there’s another way to make indoor breathing easier while adding a nice atmosphere to our indoor spaces. Buy more houseplants! Any greenery helps, but there are certain plants that clean the air better than the rest.

Think one plant for every 100 square feet.

You don’t have to buy that many at first. Invest in a few, and then propagate additional ones off the original. (my favorite way to get new plants!)

Plants that will Help Clean the Air in Your Home

Sources:
“Benefits Stemming from Space Exploration,” NASA, September 2013,http://www.nasa.gov/sites/default/files/files/Benefits-Stemming-from-Space-Exploration-2013-TAGGED.pdf.
“Plants Clean Air and Water for Indoor Environments,” NASA,http://spinoff.nasa.gov/Spinoff2007/ps_3.html.
Luz Claudio, “Planting Healthier Indoor Air,” Environmental Health Perspectives, October 2011; 119(10): a426-a427,http://www.ncbi.nlm.nih.gov/pmc/articles/PMC3230460/.
Heather L. Papinchak, et al., “Effectiveness of Houseplants in Reducing the Indoor Air Pollutant Ozone,” Hort Technology, April-June 2009; 19(2): 286-290, http://horttech.ashspublications.org/content/19/2/286.full.
Patricia M. Webb, “Indoor Plants for Clean Air,” Penn State Extension, January 16, 2008, http://extension.psu.edu/plants/master-gardener/counties/clarion/news/2011/indoor-plants-for-clean-air.
———-
If you are reading this chances are you are interested in improving your health.  Fill out the form on the bottom right side of this page or use this link to stay connected to me. I wouldn’t  want you to miss out on any of my health information. I also have a free gift for you. After you subscribe I will send you a link to download my free “How to Get a Good Night’s Sleep Guide”